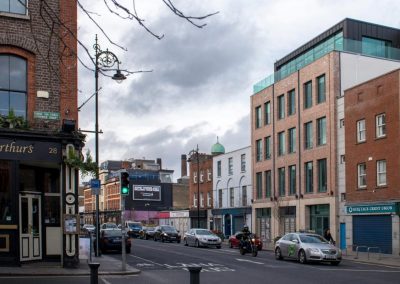 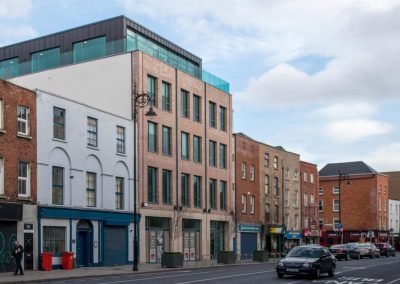 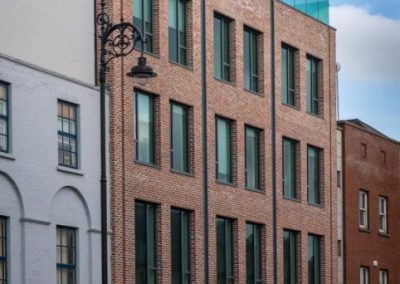 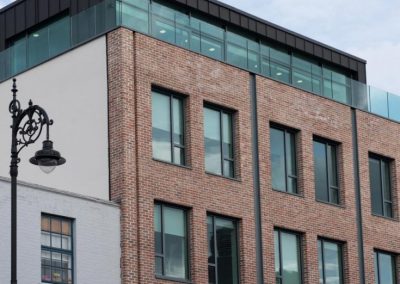 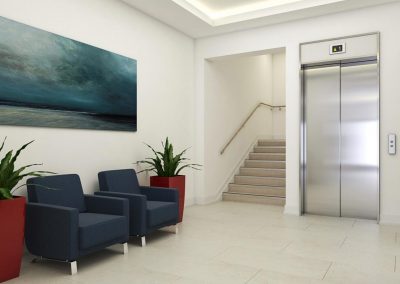 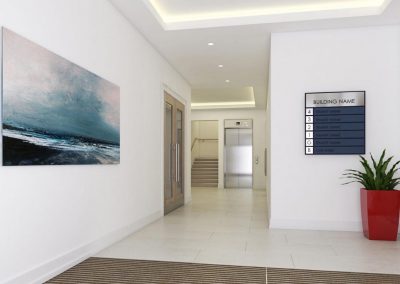 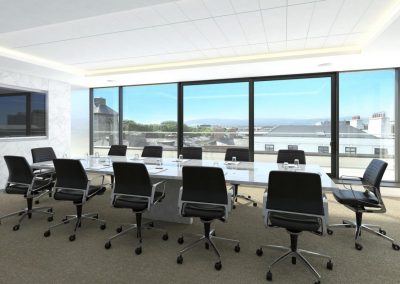 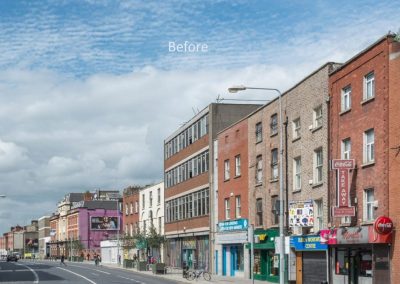 When the previous tenant’s lease expired an opportunity arose to carry out a much need renovation and extension. The building, occupying 138 to 140 Thomas Street was originally constructed in the 1970’s and requires substantial renovation in order to bring it in line with current building regulations, and to give the building a new lease of life.

The proposed works are summarised as follows and are outlined in greater detail below:

It is proposed to add a fourth floor level, increasing the existing height of the building by approximately 4m. This will add an additional 323sqm of gross floor space and contribute to the commercial viability of the project. The new level is to be set back from Thomas Street, in order to reduce the massing and scale of the addition, and minimise visual impact, particularly in relation to the views along Thomas Street. The new office area will also have access to a front terrace created by this set back. A flat roof is proposed which is surrounded by a low parapet. This new level is to be clad in zinc, distinguishing it from the original building, with full glazing provided along the front and rear facades.

The existing façade dating from the 1970’s is to be stripped back and replaced with a new façade which will give the building a clean contemporary appearance while at the same time respecting the historical context of the site. The facade design is a modern re-interpretation of the existing Georgian style along the streetscape and respects the proportions and materials of these neighbouring buildings. The materials proposed are predominately brick and glass in keeping with the historical character of the location. Overall, a vertical emphasis has been introduced to delineate the original 3 properties that existed on the site in keeping with the original urban grain of the street. This is done using 2no. recessed vertical channels on the façade. Large glazed opening are proposed along the ground floor, with 3no. sets of access doors directly into the building from the street, thus activating the street. These are surrounded by natural stone cladding to complete the shop fronts.  Glazed openings are also introduced at levels 1, 2, & 3 which are set into a new heritage brick. The proportions of the openings and the use of brick is in keeping with the character of the neighbourhood. These openings will contain aluminium framed windows which will include a flush vertical aluminium opening section, providing natural daylight and ventilation to the building. As mentioned above the new top level, set back from Thomas Street, is dressed in zinc cladding, with a fully glazed screen opening onto an open air terrace, created by the set back. No plant will be located above roof level.

Works to Rear & Side Elevations and Fire Escape Enclosure

The rear and side elevations are to be re-rendered using Sto-rend or a similar self-coloured render. This system is applied using a layered mesh allowing for building movement and settlement, thus reducing the risk of cracks appearing. This will reduce the need for maintenance and painting in the future. The windows in the rear façade are to be replaced with aluminium framed windows which will also incorporate horizontal sections of continuous louvres in order to facilitate the upgrade of the buildings ventilation system. The new fourth floor level, is to be clad in zinc, and this will return along the sides. The rear façade at the this level is to be predominantly glazed, offering building users expansive views down to the River Liffey and over Dublin. The existing fire escape is required to be upgraded in order to comply with current building regulations and to provide escape from the new level. It is proposed to clad the stair enclosure using a an architectural mesh in order to provide a transparent modern aesthetic to this element and at the same time reducing the visual impact and bulk which would result from using a solid enclosure. A plant enclosure is also proposed to the rear at ground floor level (this corresponds to 3m above basement level to the rear – refer building section drawings) which will be enclosed using horizontal wood composite battens.

The buildings internal partitions and ceilings, dating from the 1970’s, are to be stripped out and replaced with large open plan areas for use by future tenants. The toilet cores are to be upgraded in order to provide enhanced facilities, and to bring them in line with current building regulation requirements, including the provision of universal access facilities. The current lift is to be replaced, and enlarged to comply with current regulations. New raised access floors are also to be provided at level 1, 2, 3 and 4 with the central stair modified to suit.